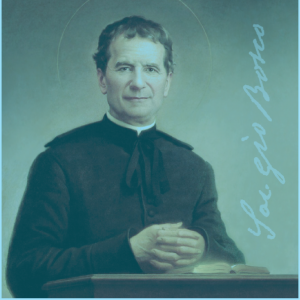 “Without confidence and love, there can be no true education.”

St John Bosco founded the congregation of priest called the Salesians to carry on his work and mission after he had died. They still run many schools all over the world today. As the founder, St John Bosco wrote a great deal about his ideas on education. He was passionate about he subject and saw it as his life mission to help other educators learn his effective Christian pedagogy of teaching young people to live good lives.
HIS LIFE:

John Bosco was born in Italy in 1815. His parents were poor farmers. His father died when John was only two years old. John and his brothers helped their mother work on the farm as she struggled to keep the family together. As soon as he was old enough, John, too, worked as hard as he could to help his mother. He was intelligent and full of life. By the age of nine, John wanted to become a priest and his mother let him go to school. John used to wake up early in the morning to do his chores before he left for school. He learned to do all kinds of trades. He was a carpenter, a shoemaker, a cook, a pastry maker and a farmer. He did many other jobs as well. He didn’t realize how much this knowledge would help others later. John would go to circuses, fairs and carnivals, practice the tricks he saw magicians perform, and then present one-boy shows. After his performance, while he still had an audience of boys, he would repeat the sermon he had heard in church that day. John became a priest in 1841. As a priest, Father Bosco, began his great ministry. This kind priest felt sad when he saw so many children living on the streets of Italy. Like a loving father, he gathered together these homeless boys and taught them trades. This way they would not have to steal or get into trouble. Many rich people gave him money to help build workshops. He later started a printing press so he could print books and leaflets to teach people about God’s love for them and how to be good Christians. By 1850, there were 150 boys living at his home for boys. Don Bosco’s mother was the housekeeper. Every night he asked his boys to say three Hail Mary’s, so that the Blessed Mother would help them keep away from sin. He also helped them receive the sacraments of Reconciliation and Holy Communion often and with love. Every morning he would say Mass for his students giving them beautiful sermons and telling them interesting stories. He asked the young boys to imitate Jesus in everything they did – whether it was work, study or play and told them that God wanted everyone to be saints as He had a great reward waiting for them. His advice to them was, “Pray when it’s time to pray. Study when it’s time to study. Play when it’s time to play. Show kindness to everyone you meet. But do it all for the love of Jesus.” One of the boys listening very carefully was young Dominic Savio who told John Bosco that he would try very had to become a saint and please God. And he did. Fr John Bosco died in 1888 when he was 73 year old. He was canonized 46 years later in 1934.