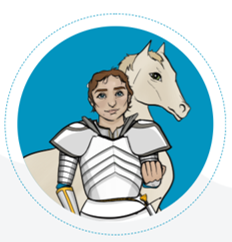 On the first Saturday of every month, we will post the story of the saint of the month. For March, the saint is Saint Joan of Arc.

Joan was born in a poor family in France in 1412. When she was young, God sent her a special message by a very special way. She began to hear the voices from some saints like St. Michael the Archangel, St. Catherine and St. Margaret. They told her she would be the one to save France which was losing the Hundred Years’ War with England and that she should help get the prince of France, Charles crowned king. Joan went to Charles’ royal court and asked him if she could lead her army. He was impressed by her courage and allowed her to lead them into battle. For the next four months, she won victory after victory in battle. She led the French army with a banner that read, “Jesu et Maria” (Jesus and Mary). At the end of the four months, Charles was crowned King. Joan wanted to return to her family, but the King wanted her to win more victories for him. She ended up being captured by the British and her last words were, “Jesus, Jesus.”