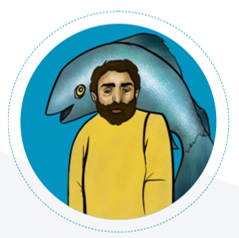 On the first Saturday of every month, we will post the story of the saint of the month. For October, the saint is St Peter, the Apostle.

Saint Peter was the first among Jesus’ apostles and one of Jesus’ best friends. He was one of the first to be chosen to follow Jesus and in the Gospels, he is usually mentioned first when the apostles are listed. Peter was a fisherman before he met Jesus. Peter is seen in the Gospels walking on water with Jesus, but then sinking into the sea when his faith faltered. He also is the first of the apostles to declare that Jesus was the Son of God. Still later, Peter tells Jesus that he would never betray him, but on the night before Jesus died, Peter did just that and betrayed Jesus three times. After Jesus rose from the dead, he asked Peter if he loved him three times. When Peter said “Yes, Lord, you know I love you.” Christ replied, “Feed my sheep.” In the Acts of the Apostles, after Jesus was lifted up to heaven, Peter is seen leading the new Church as the first Pope. He eventually went to Rome to preach the Gospels. There, during the persecution under the Roman Emperor Nero, Peter was crucified. Tradition has it that he asked to be crucified upside down because he felt unworthy to die in the same manner as Jesus. Peter’s faith is many times like our own. He is always the one who stands up for Jesus, and declares that he will always be faithful to him. Sometimes his actions don’t live up to his words. But in the end, he gives his whole life to Jesus as a true picture of his faith.